I was never a huge fan of Halloween growing up. I blame it on the fickle Idaho weather. It seemed like every costume was foiled by snow or sleet or wind. It's a little disheartening as an eight year old to have to cover your awesome Superman costume with a puffy winter coat. Superman never had to wear a coat on his trips to the the Fortress of Solitude, so it seemed really ignominious to have to have to wear one to just to walk around the block.

This year, though, I was actually looking forward to Halloween, mostly because I rediscovered the power of the costume. This time last year, the roommate and I were lamenting the onerous task of attending costume parties and trying to come with a suitable costume at the last minute, but this year, we planned ahead and decided to go big. And it totally paid off. Who you gonna call? 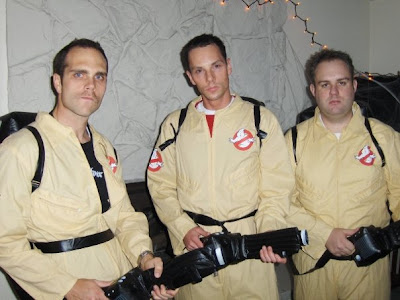 So, let this be a lesson: the awesomeness of Halloween is directly proportional to the awesomeness of your costume. I'd even call it the first Law of Halloween. I'll let you know when I develop a formula that captures the complex interactions of the differing variables, but it'll probably be something like this:

The Ghostbusters costume is awesome because even though it's not very intricate, it's a great 80's pop culture reference and I totally look like Dan Akroyd. The formula also explains why the girl wandering around with a framed picture of a Freud hanging from her neck wins the award for lamest costume ever. Being too clever can definitely kill a costume. It can also redeem it, as the guy in the AIG bathrobe and slippers proved.

So, Happy Halloween! Remember to never cross the streams.
Mused by oof around 11:06 PM