I've always been fascinated by aviation. There's something about the combination of technology, science, and extreme velocity that is enamoring. Take, for example, the SR-71 in the picture below. Built more than 40 years ago, it was designed to fly in excess of Mach 3 (that's three times the speed of sound) and more than 15 miles up (twice that of your average passenger jet.) There were more than 4000 recorded attempts to shoot this aircraft down, and what did the pilot do to avoid the missile? He simply pushed the throttle all the way forward to outrun it. This plane earned a speed record by flying from Los Angeles to New York in 68 minutes. How is that not unbelievable cool?? 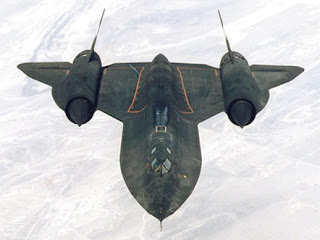 Last week, I saw the actual SR-71 that set the record. It's at the Air and Space Museum near Dulles in Washinton DC. I was there with the family, and I'm sure I was boring them to death with all the minute details that I find so fascinating. (Like the fact that the aircraft leaked fuel while on the ground...)

What's even more amazing about the SR-71 and every modern aircraft is that it has been only about 100 years since the Wright brothers made their first flights. Since then, every single challenge to flight has been summarily conquered through persistence and innovation. We now fly faster, farther, and higher than people ever thought possible. The amazing growth of flight is a towering testament to the power of unbridled human ingenuity.

When you contrast this, the storied history of flight, with the current state of commercial aviation, the mediocrity of the airline travel becomes readily apparent. I had a lot of time to think about it as I waited and waited and waited in Reagan National airport yesterday. I also thought about it as I literally ran through the cavernous Minneapolis airport so as to not miss my connection to SLC.

What's the deal? We can put men on the moon and fly across the globe in hours, but we can't get a single 757 to the airport on time. Nor can we make coach seats wide enough so that I don't have to touch knees and elbows with the guy next to me. And why, oh why, can't I have a WHOLE can of soda? And who thought of the "hub?" What a terrible idea. It may work for buses and packages, but not for people traveling cross country. Buses are a lot cheaper than planes, so you can have a lot of them to compensate for schedule problems, and well, people are not packages, people actually complain when they are left overnight in some intermediate location.

And I could go on, as could most traveler. I know I'm not the first to complain about air travel, nor will I be the last. It just makes me sad that something as miraculous and majestic as flight has been reduced to ferrying grumpy people around the country. It's no wonder that the smaller innovative airlines are the only ones really doing well in this market. The big guys seem to be circling the wagons, trying to merge and cut costs and pack more people into planes, but every cost cutting and money saving initiative seems to only further ruin the experience.

Frankly, I'm to the point were I'm willing to choose a marginally more expensive flight if I know that the service is going to be better. And, if there are others like me, then the major airlines better be quaking in their boots. Until they wake up, I'm going to keep dreaming of flying cross country in my SR-71.
Mused by oof around 8:59 PM

Email ThisBlogThis!Share to TwitterShare to FacebookShare to Pinterest
Labels: My Story, Things that must go, Travel