Have you ever met someone famous? Yeah, you probably have. Up until 3 weeks ago, the most famous person I had ever met was this guy: 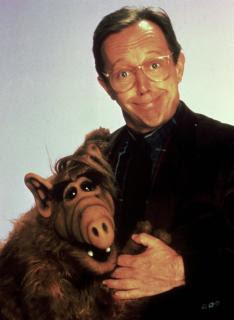 No, not ALF, the other guy. I was twelve, collecting money for Primary Children's Medical Center, something they called "Pennies By the Inch." Man, I hated that fundraiser. You were supposed to go around and suggest that people donate a penny for every inch of their height. Not only was it mathematically challenging for someone with a weak command of the twelves time-tables, but there's also no heavier way of donating to a charity.
Anyway, we were knocking doors like little Amway people in a local trailer park. Behind one of those doors was Alf's grouchy owner. Surprising to say the least. Apparently his mom lived there. Unimpressive on many levels, I know.

Then, I met someone truly remarkable. And I don't mean met as in "saw at Sundance" or the "he came and spoke at my ward once". I actually sat down and had a meal with Dick Rutan: 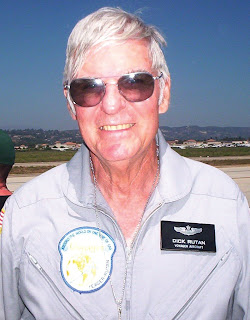 I can tell you're impressed. Old guy in a flight suit, real cool, right? Well, this is one serious dude. A real life John Wayne of the airplane world. He flew jets in Korea and Vietnam. In the latter conflict, his job was to take out gun emplacements. Meaning that he would fly around until someone was stupid enough to shoot at him, and then he would dive in and blow them to bits. He did get shot down once, but he was able to nurse his plane to the gulf of Tonkin before he ejected so that he'd be picked up by the Navy instead of the Vietcong.

When that was all over, he left the Air Force and kept flying. It worked out well because his brother designed and built airplanes. In 1986, he was the very first person to fly around the world non-stop. Then in 1997 (at 59!) he did another around the world flight in a plane he had built himself back in the 70s.

He's now 72 years old, and he flew his plane from LA to Portland to meet with a group of us doing a demonstration of some pretty cool airplane stuff that I'm sure you're not interested in. After the demo, we all went out to dinner, where he regaled us with even more stories from his life (definitely not PG). He also offered a toast:

"A toast to lying, cheating, and stealing.
If you lie, lie only to keep a friend.
If you cheat, may you cheat death.
If you steal, steal the love of a beautiful woman."

Cheesy? Under normally circumstances, most certainly. But from someone like him, I'll allow it.
Mused by oof around 12:59 AM